I Ride The Short Bus Because I'm Special

I had one of the most interesting, challenging, involving and fantastic movie experiences today. I went to see Shortbus (offical movie site) by John Cameron Mitchell. I'm sure it's not everyone's cup of tea, but I think it especially speaks to those of us in the audience on the fringes of the 'mainstream'. 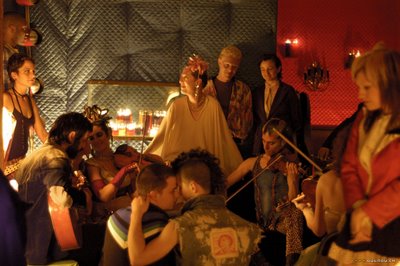 One quote I read about the film was from a reviewer who said they were more enchanted by the film than confronted by it. I have to agree. It's quite a roller coaster ride, and I'm glad that I'm going to see it again sometime in the following week, so I can absorb more of it.

Everyone is especially hung up about the sex in the film, so let's address that first. I was quite taken aback by the degree of explicitness. Not negatively, but it isn't something we are used to seeing in a mainstream theatre, and especially not bracketed by a real story and people who can act. Trust me, there is certainly little or no fakery here, the actors are having real sex and we get to see everything. It's interesting, the sex does give you a jolt at first but then you kind of adjust your expectations and it becomes less intrusive - or at least, that was my personal experience of it.

So although it kind of throws you off balance at times, what I felt it did was humanise the story and the actors. It's involving, and more 'real' than a soft fade to black when the pants start coming off. It's also shocking, titilating and funny at times. The film manages to be both deep and incredibly superficial, grittily real and dreamlike, all with in a few seconds of itself. Yet, for me anyway, it works.

One prime example is a character who at first seems like a vain self-absorbed pretty boy, which he is, but then in one of the most moving scenes in the film he shows his kindness and loving heart. He can be, and is, both of those things. Which is an unusually 3D message in what is normally a 2D medium.

Ultimately it's a very warm hearted film about connecting and relationships, about diversity and about the joyousness of sex. This is probably the most radical message of all, in a world that seems to be polarising into increased rights and acceptance on one side, and increased conservatism and denying of diversity on the other.

As well as the offical movie site, the Shortbus Salon cast and crew blog has some interesting snippets about the cast and crew, and the promoting of the film. Worth a look.
Posted by The Other Andrew at 6:39 pm

Email ThisBlogThis!Share to TwitterShare to FacebookShare to Pinterest
Labels: movies

I have never heard of this movie, but you make it sound good. I will watch for its arrival in Phoenix.
thanks for the tip.

I saw this last night. I need a few more moments to collect my thoughts.

Michael, I was a bit like that too. I was quite buoyed and charmed by it, and quite sad and somewhat melancholy in parts. It's complex I think.

BTW - did you know that Paul Dawson (James) and PJ deBoy (Jamie) are couple in real life now? I gather it happened during the 3 years the film was in development, because if you read their bios and the blog it sounds like they hadn't met previously. Oh, and they are Paul & Paul, so art really does imitate life! Sweet I thought.

"I love everybody, especially cute people."

Bodhi & I have decided to go and see it here this week... let you know what we think Friday! See you soon... and Thai for dinner i can hardly wait xx