Boozy In The Afternoon

Up until about 2 or 3 weeks ago I was working 2 part-time jobs, for a grand total of 6 days a week. Unfortunately the better paying 4 day a week job ended when the company I was working for finished the big project they were doing with one of the major banks. I've had trouble getting another job to replace that one, so I've been trying to subsist on the 2 days a week I am getting at the yarn store. Not very successfully, it has to be said.

When the project with the bank ended, the subcontracted company I was working for said some lovely things about how well I had done and sent me an invitation to attend the staff Christmas party. So earlier today, a postcard perfect Summer day here in Sydney, I headed out to join them for their Christmas lunch. 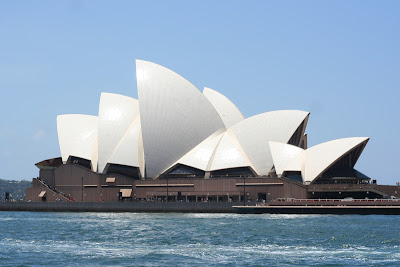 The Sydney Opera House from this morning's ferry ride.
The invite said that lunch was at a restaurant called "Sails" at McMahon's Point, on the norther side of the harbour. As it was such a beautiful day I was glad that it seemed that the easiest way to get there was going to be by harbour ferry. So once dolled up for what I assumed would be a fairly posh, yet waterside relaxed, restaurant (in what I hoped was a casual with an edge outfit of 501 jeans, slim fit blue military style shirt and skinny leather tie) I grabbed my camera and set off. With the intention to have an enjoyable afternoon and not think about the stressful stuff. 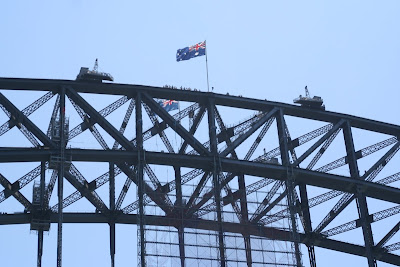 Wave to all the people doing the Bridge Climb everyone!
[Click to enbiggen it, they are the row of tiny figures along the top of the bridge]
As someone who was primarily working on site in bank branches for the company, I had spoken to many of the staff and management but had not actually ever met them, so it was great to put faces to names and voices. The restaurant was nice, a fairly small affair right on the edge of the water and our table butted right up against the window which we were able to open to let in the breeze off the harbour. The food was pretty good, but it was the rivers of alcohol that were memorable. Lordy. I think I had the equivalent of about 3 glasses of Champagne before the food arrived, and by the time we rolled out of there at 4.30pm I had added plenty of lovely Sauvignon Blanc (and one strong coffee) to the mix. 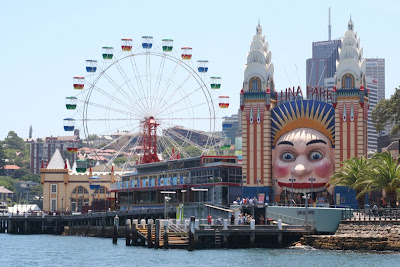 Luna Park, the restaurant was in the little bay just behind.
I kind of hoped it would be an opportunity to network with the management of the company, and thankfully it was. I've been a bit down about the work and finances situation lately, so to have a nice swish lunch at someone else's expense was a nice respite from that stress, but best of all I got some genuine, heartfelt and effusive praise and gratitude from them for the work I put into the project.

They are keen to get me back, and have some large new projects in the works. On the way to the restaurant I had a very disappointing call from my temp agency telling me that a job I was due to start next week has fallen through, and that they were struggling to get other work in. So the praise and the talk of possible new work starting after the Christmas break gave me a boost I needed. Three separate members of the management team all told me independently that they wanted me for this new project.

So boozed and schmoozed, clutching my Christmas gift of luxury chocolates and free movie passes from the company, I caught the ferry back across the water. Feeling a bit happier and more optimistic.
Posted by The Other Andrew at 11:59 pm

What a lovely day...what a lot of lovely surprises (hic) and best of all you have only yourself to blame! Good work results in good karma my friend...go forth and prosper!

beautiful pictures! It looks so bright and lovely there...not dreary and miserable like it is here now.

Keeping fingers and toes crossed for you!

Glad to hear Sails is still good - haven't been since it changed chefs a year or so ago.

Great news there might be a job on the new project - ring them up on Monday to say thanks for lunch, now let's talk about the job (in case rivers of booze stifle their memory of their conversations with you!).