Stonehenge By The Cahill Expressway

James clued me in on a little secret discovery on Saturday, after we had been to the Maritime Museum and the Police & Justice Museum. There is a sort of triangular park formed by the intersection of a couple of busy city streets and the Cahill Expressway, and in this park is an oddity.

(Technically, once James and I were there there was actually 3 oddities, but that's just muddying the waters. So let's keep on-topic, shall we?) 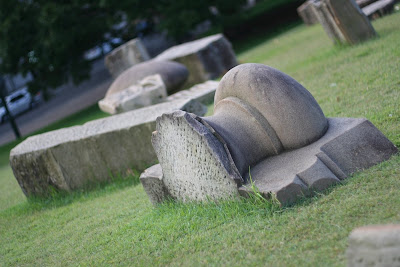 The centre of the park is a gentle mound covered in a bizarre assortment of stone architectual fragments. A piece of carved doorway here, a lintel there... 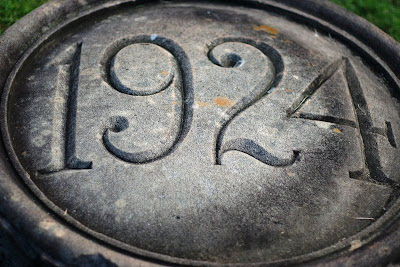 Neither James or I know anything about it, whether it was conceived as an art installation or maybe just a gesture on behalf of the city council towards rememberance of lost glories. It's a strange place, and for an architecture nerd like myself a little depressing. I looked at some of the beautifully carved fragments and could only dream what the original buildings may have looked like. 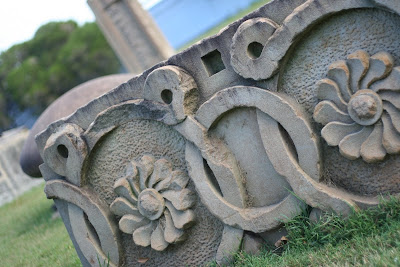 Maybe it's a sort of Fairy Ring, a gathering place for draftsmen piskies, builder brownies and stone mason sprites? Or a home for arcane and secret Masonic rituals? 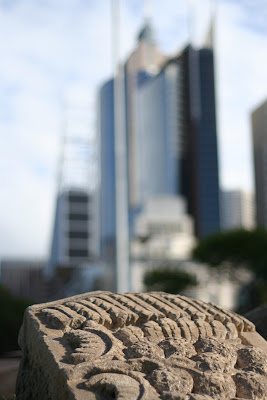 Sure, probably not. The explanation is probably a lot more prosaic, I agree. Still, it makes for an interesting park and feels a little like you've stumbled across a small scale mystery. A little oasis of strange bordered by busy roads and glossy skyscrapers. I think cities really feel alive when you encounter these sorts of things, interesting public spaces, public artworks where you least expect them, or evidence of layers of history and occupation.
Posted by The Other Andrew at 4:57 pm

I always assumed this was part of the Royal Botanic Gardens...?

drop by around June 21 and see if there are any pagan prancing about it.

Arj it's just outside one of the entrances to the Botanic Gardens, so maybe?

Ur-spo, If I hear the bells of Morris Dancers or Druidic chants I'll let you know!

Yes, yes, yes... I remember this when Ma and I were on the big red Explorer Bus... we never got off and had a look at it, but I remember the ongoing narration on the bus saying something about it being an "Australian Stonehenge" or something... I think it was by an artist with an Asian sounding name... damn, now I'm going to have to google...

Memory is Creation without End... Spiral of sandstone blocks by Kimio Tsuchiya, relics of demolished buildings symbolising the circular connection of past, present, and future, 2000.

I love this park and knew you'd been there from the pictures before I read the lovely words.

Was this plaque no longer there?