Guerrillas In The Midst

"Guerrilla knitting" (aka "knit tagging" or "urban knitting") and crochet has been around for a while now, but locally seems to have been back in the public eye again just recently. A guerrilla knitter was 'tagging' the columns in the ABC foyer during the ABC702 Knit-In that I wrote about recently, and on a very local level bits of guerrilla knitting have been cropping up around my 'hood of Newtown. 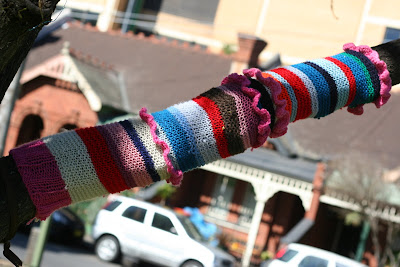 A new example in Camperdown Rest Park, Newtown.
The other day when I was at work in the yarn store, I sold some Australian made 'self-striping' sock wool to a woman who was heading off to the US to meet some other knitters and get her guerrilla knit on.

Tagging with a spray can or paint marker I can't support, but this kind of non damaging tagging I love. Like many things that spring up in the alt craft community, the origins are shady and various claim have been made about who had the idea first. It seems likely though that the best candidate for inventing the idea is the Knitta crew, who have been knit tagging since 2005.

Whomever it was, the idea certainly took root fast and knitted 'tags' started cropping up all over. Some international examples are the Swedes Masquerade, Knit Sea and Niclas & Jonny of KnittUps, and Chicago's The Micro-fiber Militia. Another website, The Knitted Landscape, has many great examples contributed from all over the world.

My favourites are examples where a specific and unlikely object has been wrapped, transforming it into something different. For style, colour and the sheer joy it gives me, my all time favourite piece of guerilla knitting is this maritime piece from Sweden by Masquerade. So gorgeous and unexpected. 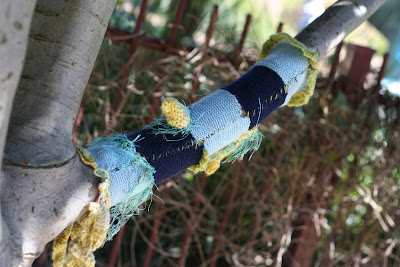 Another tagged tree in Camperdown Rest Park, Newtown.
I find guerrilla knitting as being somewhere between graffiti style tagging, street art, murals and even performance art. The act of wrapping an object in something soft, handmade and colourful makes us look at the object differently. It's part joke, part leaving a mark to say "I was here", part civil disobedience, part advertisement for just how cool craft can be, and partly a gift of fun to the community. It's certainly non harming, and quite charming in my eyes. There is a great post on Deputy Dog which calls it the "world's most inoffensive graffiti".

Similarly, some artists have used ephemeral and community based knitting projects to great effect. Josie Schimke created the beautiful A Tree Undone at Burning Man in 2007. A 9 foot tall artificial tree was clad in hundreds of knitted leaves contributed by individual knitters, with the specific instructions that the knitting not be properly bound off. The wind, and Burning Man attendees, where then invited to unravel the leaves throughout the course of the festival. Josie has posted albums of in progress photos and one of the tree in situ. Fabulous!

If any of my local Sydney peeps see anymore guerrilla knitting about I'd love to know. Just email me the location to andrewmr(at)ihug(dot)com(dot)au!
Posted by The Other Andrew at 7:02 pm

OA, you might be interested in this little piece from one of my favourite blogs: Threadbangers. You mention Knitta Please: here is a wonderful piece of them "attacking" Brooklyn parking meters.
http://www.threadbanger.com/ispydiy/episode/ISPY_20090610_1

Oh cool! Thanks for the the link!

lovely idea!
Wish I could knit.
Maybe I can try it with a tube sock and some thread?